A big thank you to my niece, Brittney Mitchell for letting me use her incredible original song, Fighting the Decree.

The video was produced by ~V~ Mitchell (my daughter) and Phyconian Productions.

Okay, maybe love is too strong a word, but one thing I forgot to check during my promotion was my foreign sales. I did surprisingly well in England and Germany, where I not only gave away free copies but also had some sales as well. I also had people pick up free copies of Werewolves in Spain, Italy, and France. The topper, though, is that I got two reviews on the British Amazon site: https://www.amazon.co.uk/dp/B007KAE45A

It’s interesting when I think about people in other countries reading my stuff. Some day I may have to dabble in translations, just to see if it would be worth it. I do have a connection with someone who can translate English into Spanish and French, but she’s pretty busy right now. Maybe in the future…

On another note, I have a writers conference coming up this coming weekend, and interviews lined up with two agents.  I’m working hard on a final edit and polish of Son of Thunder, which I am planning to pitch to them.I’m keeping my fingers crossed that I can find a new agent soon.

The free promotion of There’s no such thing as Werewolves went many time’s better than I though it would. I gave away over 2,700 copies, and received increased sales of both my other books during the promotion. Also, since the end of the promotion, sales of Werewolves appear to be up also. The promotion exceeded all my expectations.

I think of my publishing venture as this huge machine. Something I’ve invested a lot of time, energy and heart into. For the most part, it has felt like the machine is just sitting there, though occasionally I saw promise that it would start to move. After this promotion I really feel progress, like the wheels of the machine are starting to turn slowly, and just maybe some steam is building.

I would like to point out a wonderful group of people, who have helped me incredibly over the past year. The Writer’s Voice writing group of Eagle River, WI. If you are a beginning writer and live in north-central Wisconsin, please consider joining us. You will not find a more supportive and nurturing group of people to share your writing adventure with.

As I continue to grease the wheels of my writing machine, it’s nice to have some friends along for the ride.

Yes. In honor of my new release: The Forsaken Templar – Demons Rising: Book 2, I am giving away Book 1 for free! Today through Sunday you can get a free download of the kindle version of There’s no such thing as Werewolves – Demons Rising: Book 1. It’s a great opportunity to introduce yourselves to the Demons Rising world. Get yours today by going here: http://www.amazon.com/dp/B007KAE45A

Just a quick note that i will be joining a great group of Romance Authors in a Signing for Literacy event on Saturday, June 2nd, from 5:00 – 6:00 pm at the Holiday Inn Hotel & Suites, 1000 Imperial Ave, Rothschild, WI. All three of my books will be available for sale as well as many others including Jade Lee, Zoe Archer and Elizabeth Hoyt. Stop out and meet some real romance authors (and me too) and help support literacy.

Just a quick update here: The print version of The Forsaken Templar has now appeared on Amazon. If you prefer buying through Amazon you can find it here: http://www.amazon.com/The-Forsaken-Templar-Demons-Rising/dp/1477444599/ref=sr_1_1?s=books&ie=UTF8&qid=1336916077&sr=1-1 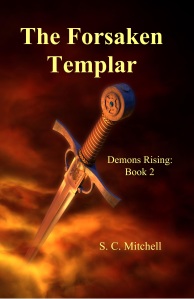 Today is release day for The Forsaken Templar, my second book in the Demons Rising Saga. This story continues the tale started in There’s no such thing as Werewolves and adds an interesting new faction to the world, the Knights Templar. There’s also a big surprise revealed about the sorcerer Nathan Grey. The Novella is now available both in Print and for Kindle. The print version is only available direct from CreateSpace right now, but will be up on amazon within the next 5-7 days.

Also today I am proud to announce Book 3 in the Demons Rising Saga: Knight of the night. The plot is coming together nicely and I hope to have it available sometime this fall.

If you haven’t read the first book, There’s no such think as Werewolves, then there’s some more good news: I plan on putting the Kindle version up for FREE sometime next week. Now there will be no reason not to be up to date an the pending demon invasion of Earth. Watch here for that announcement, or click the <LIKE> button on my Facebook Author Page.

The Kindle version of The Forsaken Templar can be found here: http://www.amazon.com/dp/B0081S8LPO

The print Version on CreateSpace is available here:  https://www.createspace.com/3874278

What are you waiting for???