Today I’d like to welcome my fellow Soul Mate author, Gerri Brousseau. Gerri, it’s great to have you with us today on A Writer’s Haven.

Hi Steve, thank you so much for visiting with me today. I’m looking forward to meeting your readers and hope they will not be timid in asking questions.

Gerri, when did you know you wanted to be a writer?

Well Steve, I’ve been writing ever since I was a kid, but I only began to have serious thoughts of becoming a published author in 2009. It seems that throughout my entire life my friends would always be saying, “Gerri, you should write a book,” and I finally took their advice.

Steve:  How long did it take you to write your first novel?

Gerri:  I had never attempted to write a novel before and had no idea what I was doing.  I didn’t know there were “rules” to writing, such as point-of-view, I simply knew I had a story burning in me to be told.  It took me 3 months to complete the first draft of According to Legend, but then I put it aside and kept writing. After I had written my third novel, I started submitting. As it turned out, the third book I wrote, A Pirate’s Ransom, got published first and my first one released second. The second book is being revised and edited right now. I’m really happy I wrote a few novels before I started to submit because it has enabled me to have three releases within one year.

Steve:  Are you a plotter, a pantser, or something in between?

Gerri:  I’m something in between. When I get an idea for a story I ask myself a lot of “what if” type of questions. Once I have a solid idea of how I want the story to go I jot down a few key points and then start writing. I am not one to do an outline. I find if I over think it I feel as if the story has been told and I lose interest in writing it. I like to let my characters tell me their story. I’m merely the instrument they use to do the typing.

Steve:  What do you do when you’re not writing?

Gerri:  I work full time, take care of my home, spend time with my two pugs, Mimi and Milo, and get tolerated by my two cats, Harry and Louise. But the activity I love the most is spending time with my 8-month old grand-daughter. I like to take quiet walks, which is where I twist story lines around and give lots of thought to how many ways I can torture my hero and heroine before I allow them to finally have their happily ever after. Another passion in my life is cooking. I enjoy creating delicious meals to share with my family.

Steve:  What inspired you to write this novel?

Gerri:  According to Legend came to me in a dream. I wish all my novels could be like that. Once I had the incredible dream and started writing it seemed as if the story just poured out of me. It was such a thrilling experience. I’ll tell you this, when I typed the words, “The End,” I cried.  It was at that moment I knew I had found my purpose and passion in life.

Gerri:  My third novel, To Kill a Monarch, will be released by Soul Mate Publishing over the summer of 2013. It’s an intrigue romance. Let me give you a glimpse to whet your appetite.

Whispers in dark allies say Napoleon’s best assassin, The Falcon, has been sent to London to kill the Monarch. The problem – The Falcon’s identity is known only to the French Emperor. Sir Walter Tinsdale’s new partner, Philip Hamilton, arrives to discover their mission is to find the elusive bird of prey before he strikes. But their nemesis is like a phantom and always one step ahead of them. Enter the lovely Miss Charlotte Winston, the object of Sir Tinsdale’s affections, as well as those of Philip Hamilton. Unlikely alliances, deception, murder, and suicide will keep you turning the pages until the identity of The Falcon is finally revealed. With all the seduction and action of a James Bond movie, To Kill a Monarch is like 007 in 1811.

While I await the start of the editing process on that book I will begin writing my next book. And if that’s not enough, there is also the re-writing and editing that is going on with my Civil War family saga, Plantation Hill. Writing has always been such a part of my life that I simply can’t imagine what my life would be like if I wasn’t writing. I do have to say, when that alarm clock goes off in the morning, I’m on the go. Between work, writing, editing, and promoting existing releases, life can be crazy busy, but busy is good.

Thanks again for inviting me here today. It was a lot of fun. I hope your readers enjoyed our visit. If they would like to find out more about me and my writing, here is the link to my website:  http://www.gerribrousseau.com 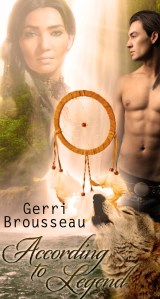 BLURB FOR ACCORDING TO LEGEND

According to Legend, when the spirit of the Tribal Princess is born again and she holds the enchanted stone in her hand, the lovers will be reunited . . . even through time.

Pam Hastings, an advertising agent, lives a boring life until she comes into possession of an enchanted dream catcher, which through her dreams, draws her back in time and into the arms of the handsome Warrior Chief, Moheeladeck.

Pam discovers the stones entwined within the dream catcher hold special powers and are also the key to a secret cave, rumored to contain untold riches. When Pam is followed and her house broken into she realizes she needs protection. That is when she meets the handsome and charming dog breeder, David Conner, who gives her Half-Breed. But Half-Breed is no ordinary dog, and has secrets of his own.

With the village burning and the tribe under attack, Moheeladeck is torn between his duty to protect his tribe in his time and his desire to protect the woman he loves in hers. David is torn between his love for the same woman and the destiny he was born to fulfill . . . her destruction. Pam finds herself caught in a love triangle between these two men; a love triangle that spans into both realms of time. With rivals in both the past and present pursuing her to control the power of the stones and the treasures in the cave, who is really behind it all? Who can she trust? With two warriors who profess their love for her, who will capture her heart? We find out only in her dreams. 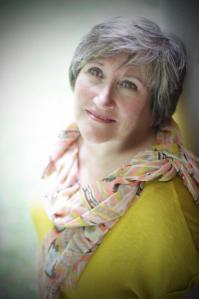 Gerri was born and raised in Connecticut. She attended Central Connecticut State University, majoring in English Literature.  Although she lived on the west coast for several years, she relocated back to her roots and birth place of Connecticut, where she presently resides with her two pugs, Mimi and Milo and her cats, Louise and Harry.

As a young girl growing up in Waterbury, Gerri spent her summers writing stories and often times, together with neighboring girls her age, would present original plays for an audience of their parents.  When she moved back to Connecticut, Gerri took a job that required her to commute 4 hours a day by train to and from work.  After a year of reading a book a week, she decided to make the time work for her, when one night after a strange dream about a dream catcher, she was inspired to write her first book.

Lest you think all of her time is spent in contemplative pursuits, freefalling out of airplanes gave a whole new meaning to the word “adventure”.  Yes, a former skydiver who chose to retire from the sport, Gerri assures us that freefall is totally exhilarating and one of the most amazing and thrilling experiences anyone can have.  Her energy and zest for life is found in the imaginative and page turning adventures she writes.

A Pirate’s Ransom is her debut novel with a release date of August 22, 2012

Purchase Links for A Pirate’s Ransom

Purchase Link for According to Legend

26 thoughts on “A visit with author Gerri Brousseau”