Would you like to live in a perfect world? 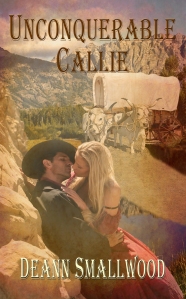 Callie Collins, a proud woman in the late 1800’s is a liar and a darned good one, a master of the dubious art. She is also a dreamer. Her greatest hope is to reach a new life in South Pass City Wyoming, where she can open a bakery and live an independent life. To be successful, she will need her greatest gifts of deception to date. As a woman alone, she has to prove to Seth McCalister, the wagon master, that she has the wherewithal (a wagon and a set of oxen), the stamina to survive months of drought, dust, hardships and even risk of death, and a mythical fiancé who waits at the end of the line. McCallister is uneasy, but also mystified by the audacity and determination of the young woman. He allows her to join the train west. What he doesn’t realize is there is no fiancé. To make matters worse, Callie is in love with Seth McCallister, too. For the first time, the lies that have brought her so far in life threaten to keep her from her one, true love. McCallister is a man of strong character and Callie feels certain that once he realizes her deception, he’ll turn away, ashamed of his love and trust in her.

She left the empty dining room and, with shoulders squared, set out for the general store. The town hummed like a beehive of angry bees, streets crowded with wagons of every description, vendors set up on any available space offering any and all items needed for the trip west. If you wanted it, Independence had it. You just had to find the right stall or store.

Callie strolled past each vendor seeing-without-seeing the wares. There would be time to stock her wagon once she had one. She reached for the door to the general store only to have it shoved open from the inside, hitting her with such force she went tumbling backward down the steps. She landed on her rump in the dusty street, hat askew, petticoats up over the top of her fashionable buttoned shoes.

Before she realized what had happened, she was pulled up into strong arms, then flopped over a masculine forearm while a large hand administered rib shaking blows to her back.

“Breathe.” The order came harsh in her ear while he smacked her back again.

“I said breathe, lady.” The stranger shook her.

“Stop,” Callie gasped weakly, head wobbling from side-to-side. “Stop pounding my back and shaking me.” She forced the words out between squeaky intakes of air.

As sudden as the earthquake had started, it stopped. She remained in a tight vise against the man’s chest.

Then he spoke again, his voice full of anger. “What in the hell, begging your pardon, Ma’am, but just what were you doing on the other side of that door?”

Callie pulled her head back and attempted to focus. How dare he! He’d just pushed her down two steps, into a dirty street, showed her petticoats to passersby, knocked the breath out of her, pummeled her back to black and blue, and then berated her for standing in front of a door leading to a place of business.

“Hush,” he barked. “I hollered to ‘Stand clear’ before throwing open the door. Are you deaf?”

No, she hadn’t heard. She’d been thinking, worrying, about that dratted wagon. Anyway, it certainly wasn’t her fault and as soon as she freed herself of a pair of strong arms and a man smelling of witch hazel and the clean scent of wood smoke, she’d tell him so.

“We were rolling out kegs and barrels. You could have been hurt. I’ve seen some dumb stunts, lady, but standing there with your head in the clouds when someone is trying to prevent an accident, is just, well, it’s just crazy.” With that, he released her and set her firmly on her feet. He brushed off the dust clinging to her dress.

Callie eyed him apprehensively and backed away only to feel the heel of her shoe teeter over the edge of the step. She flailed her arms and would have tumbled back down the steps again if, quick as a snake, he hadn’t reached out and grabbed her.

“Ma’am,’ he growled, “you’d better get home to the safety of your kitchen and not venture out without your husband on your arm. You’re a menace.” And before Callie could put her tongue into action, he picked her up like a doll and firmly set her to one side while he stormed down the steps. He was part of the crowd before she could speak all the unladylike words that were on her lips.

Of all the egotistical males, she had just met the king. How dare he admonish her to home and hearth? How dare he knock her down, brush her off, and scold her in front of everyone? Men. If she ever needed proof she’d done the right thing in seeking independence, there it was. A tall, strong, pigheaded stranger who just happened to have the deepest pair of blue eyes she’d ever seen.

Other books by DeAnn:

Tears in the Wind 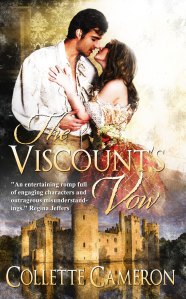 The Viscount’s Vow by Collette Cameron

Amidst murder and betrayal, destiny and hearts collide when scandal forces a viscount and a  gypsy noblewoman to marry in this Regency romance sprinkled with suspense and humor.

Part Romani, part English noblewoman, Evangeline Caruthers is the last woman in England Ian Hamilton, the Viscount Warrick, could ever love—an immoral wanton responsible for his brother’s and father’s deaths. She thinks he’s a foul-tempered blackguard, who after setting out to cause her downfall, finds himself forced to marry her—snared in the trap of his own making.

When Vangie learns the marriage ceremony itself may have been a ruse, she flees to her gypsy relatives, declaring herself divorced from Ian under Romani law. He pursues her to the gypsy encampment, and when the handsome gypsy king offers to take Ian’s place in Vangie’s bed, jealousy stirs hot and dangerous.

At last, under a balmy starlit sky, Ian and Vangie breech the chasm separating them. Peril lurks though. Ian’s the last in his line, and his stepmother intends to dispose of the newlyweds so her daughter can inherit his estate. Only by trusting each other can they overcome scandal and murderous betrayal.

They were alone on the dance floor. Ian deftly twirled Vangie around his aunt’s smallish ballroom, mindful of the interested gazes watching them.

Stealing a glance at the smiling and nodding onlookers, he suppressed a frown. He felt like a curiosity on display at Bullock’s Museum. He wished others would take to the floor, so he could dispense with the devoted bridegroom facade.

The twelve courses at dinner had been torturous. His wife hadn’t taken more than a dozen bites nor said as many words. He’d tried to eat the succulent foods Aunt Edith had gone to such efforts to have prepared, but his anger made everything dry as chalk and every bit as tasteless.

He chuckled. “Don’t you think you might address me by my given name, wife?”

“Why?” she asked pertly. “I’ve known you but four days, certainly not long enough to be so familiar with you.”

He lowered his head, breathing in her ear, very aware every eye in the room was trained on them. He’d give them something to gossip about. “Because I want you to, wife, and you did promise to obey.”

He nipped her ear.

She jumped and a tiny yelp of surprise escaped before she clamped her lips together. Her eyes were shooting sparks again; only this time they were directed at him.

Drawing her closer, her breasts pressing against the breadth of his chest and cresting the edge of her bodice, he murmured, “Indeed, but Evangeline sounds . . . angelic, and we both know you’re no such thing.”

“Pardon?” She stiffened, trying to shove away from him. “I don’t under—”

His head descended again. “Say it, or I’ll trace your ear with my tongue.”

He grinned as her breath hissed from between clenched teeth. She stumbled, her fingers digging into his shoulder and hand. A very becoming flush swept across her face.

“Will you cease?” Her worried gaze careened around the room. “We’re being watched.”

Giving her a gentle squeeze, he started to dip his head, caressing her elegant neck with his hot breath.

“Ian, your name is Ian,” she gasped breathlessly, twisting her head away.

She can also be found on WordPress, Tumblr, LinkedIn, and Google+

“Ah, Christ. You’re killing me.” He fumbled for the nearest wall, propped her against it, and took her mouth hungrily. She fisted her hands in his hair, nipping his full bottom lip. The kiss went deeper, and she could have sobbed from the glory of it.

They broke apart, both panting. Kendall slowly unwound her legs and Denn loosened his hold, letting her slide down his body until her feet touched the floor. She felt every hard muscle along the way.

“Hell.” He sucked in a shaky breath. “I don’t want to leave you here.”

“I’ll be all right,” Kendall lied. She wanted him to stay, wanted him in her bed, all night, and then she wanted to awaken in the morning, safe in his arms. They’d known each other less than two months, and she wanted forever.

I must be crazed with lust. That’s the only explanation.

“You know, you don’t have to stay here alone.” He caressed her cheek as he gazed at her, still pressed intimately against her. “You could come home with me.”

“Eventually I have to live here, Denn. By myself. I have to get used to it,” she pointed out.

“But not tonight, okay? Come home with me, Kendall. Stay with me, tonight.”

“We’ll end up in bed together.” It was a question and a statement.

She whispered into his shirt, “We’ll end up making love.”

“I can just about guarantee it.”

Fascinated by the strong, steady pulse at the side of his neck, she shuddered to think of what lay ahead, if she said ‘yes.’ Most of the shudders were from excitement.

He waited patiently in her dimly lit store while she battled inner demons he might never understand or be able to accept.

She took a deep breath and raised her eyes to his. “I should pack a few things.” She hesitated, and took the final plunge. “I’ll need my contact lens case, too.”

His smile, wide and happy, blinded her. “I can wait.”