Get your copy today for just 99¢ at: https://www.youtube.com/watch?v=dE27hIPHLEc 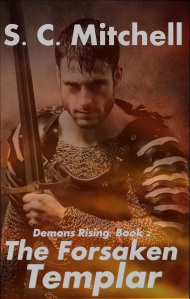 Templar Knight Geoffrey le Court has been stuck in purgatory for the past seven hundred and thirty years. He’s been forsaken and forgotten. But the sorcerer, Nathan Gray, has the power to release Geoffrey, and a plan to help him complete the quest that got the Templar stuck in purgatory in the first place. Nathan also knows the perfect person to help Geoffrey with his quest to destroy the Demon Gate.

Librarian Kelly Grant is a powerful Arcanist sorceress. Kelly has vital information Geoffrey needs to complete his quest and liberate his soul. There’s only one slight problem. The Arcanists and the Templars hate each other. They have been at war for thousands of years. There is no way Kelly would ever work with a Templar.

At the center of their war is the Demon Gate. Created in Atlantis at the dawn of recorded time, this portal to another dimension is at the heart of humanity’s worst problems. Only by working together can Geoffrey and Kelly hope to destroy the Demon Gate. But can they put aside their differences in time to stop a flood of demons poised to invade our world?

The Forsaken Templar is the second book in the Demons Rising saga. It’s a love story between two special people who live in a very dangerous world.