Thousands of years ago, a portal opened between Earth and the demon dimension of Ballor. Since that time, demons have been crossing over to hide among us cloaked in illusion.

Jack Hughes is cursed. Each full moon, his body is taken over by a demonic force. He’s learned to cope by locking himself in a cell each night to keep the demon from breaking free. It’s a dark secret he’s not willing to share with anyone, until one night when the demon breaks out.

Sorceress Anna Brown is one of the leading experts on demons for the Arcanists. She knows Jack’s secret and how to help him, if he’ll let her. The local demons are after Anna. She has a power they want to control. Does she have enough magic to save Jack and keep the local Demon Lord at bay?

*This book is a re-edit of a previously published book by the name There’s No Such Thing As Werewolves. The book has been updated and some elements changed, but the story is essentially the same.

I’m so happy to have taken the opportunity to re-imagine these tales, and I’m looking forward to expanding upon them.

Templar Knight Geoffrey le Court has been stuck in purgatory for over seven hundred years. Forsaken and forgotten until the sorcerer, Nathan Gray, releases him into the modern world. Now he must adjust to modern technology, as he continues the quest he started so many centuries before.

Kelly Grant is a powerful Arcanist sorceress. She has vital information Geoffrey needs to complete his quest and liberate his soul. There’s only one slight problem. The Arcanists and the Templars hate each other. They’ve been at war for thousands of years. There is no way Kelly would ever work with Geoffrey.

At the center of their war is the Demon Gate. Created in Atlantis at the dawn of recorded time, this portal to another dimension is at the heart of humanity’s worst problems. Only by working together can Geoffrey and Kelly hope to destroy the Demon Gate. But can they put aside their differences in time to stop a flood of demons poised to invade our world?

*This book is a re-edit of a previously published book by the name The Forsaken Templar. The book has been updated and some elements changed, but the story is essentially the same.

Alliance Releases Dec. 13th and is now available for pre-order on Amazon: https://www.amazon.com/gp/product/B081ZJ97FF/ 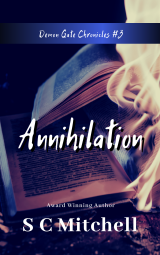 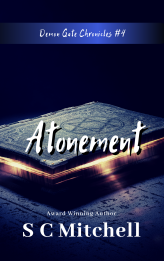 Atonement – Demon Gate Chronicles: Book 4, the first all new book in the series, hits the shelves just as soon as it’s ready.

It looks to be a big month for me. Oh, yeah, and there’s also that Christmas/New Years thing happening, I guess.